February 22, 2016
Yesterday I visited Pagham Harbour Nature Reserve for the first time, even though the weather was rubbish I saw some great birds. 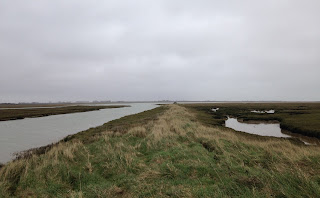 It was extremely windy when I got there, as I walked to the hide there were a flock of Goldfinch feeding on Teasel either side of the path. From the hide I could see around 100 Lapwing mixed in with around 25 Starlings. They kept on lifting up into the sky however I couldn't see any bird of prey around. In the distance there were 50 Wigeon as well as Teal and Shoveler in small groups around the water. It was also nice to see 11 Curlew from the hide, it was actually the first time I had seen a Curlew close-up. I hadn't realised how beautiful their plumage and how long their bill actually is. 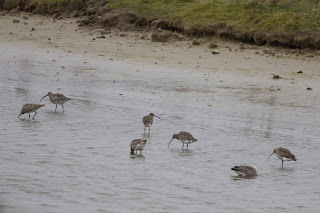 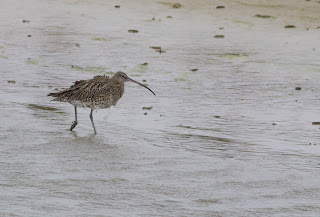 As we were walking out to the harbour over 250+ Lapwing lifted up high into the sky and started almost murmurating like starlings would. It was just amazing. Along the stream that leads to the sea there were 3 Little Grebe hidden within the reeds and quite a few Tufted Ducks bobbing along the rough water. A Little Egret also was hiding in among the reeds.

Following a narrow track we realised we wouldn't be able to reach the beach however we could go back and walk along the other side that was closer to the majority of birds. Before heading back I glanced of the water and mudflats and spotted a group of around 40 Avocets, a lifer for me! As we headed back a group of waders flew past me extremely quickly, I managed to take a photo to be able to see what species it was. They were Golden Plover, another lifer!

As went back to the visitor centre to have our lunch there were the usual garden birds at the feeders, Blue Tit, Great Tit, Wood Pigeon, Blackbird and Goldfinch. Heading back out there were 10 Redshank and more Curlew. 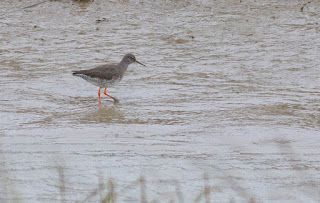 Overall it was a great day out birding, next time however I would go on a day when the weather was a bit better!