Showing posts from November, 2017
Show All

A rather cold morning at Old Lodge 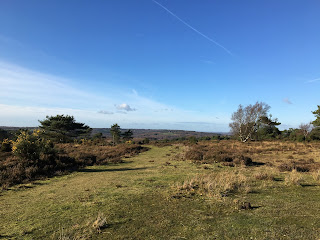 A chill in the air and the crunch of frost under foot, it was a beautiful morning at Old Lodge Nature Reserve in Ashdown Forest.


Walking on the main path of the reserve, the first bird I noticed was a Raven. This massive member of the crow family flew past me, its deep, croaking call echoing throughout the woods. Among the trees were a few coal tits flying from twig to twig, feeding on the conifer seeds. A couple of goldcrests joined them, also feeding on the trees's seeds.

The cold weather had brought the robins out, with one perched very festively on some holly. Walking through the now rather dull looking heather, a pair of stonechat were perched on top of a surprisingly flowering gorse bush. When you stop and listen, you can really hear how the stonechat's call sounds like two stones being knocked together!

Further round the reserve I heard the harsh call of the skulking dartford warbler, the same place I saw one last time! It perched on top of some gorse and at one point w…
Post a Comment
Read more
More posts