Showing posts from November, 2016
Show All

Birds in Abundance at Church Norton

After waking up, seeing blue skies and it being surprisingly not too cold we made the hour journey to Selsey to go to Church Norton. I was quite pleased to see there had been a Long-Tailed Duck and Slavonian Grebes sighted there recently.

After quickly stopping off at Pagham Harbour Visitor Centre, there was quite a lot of Wigeon and Teal on Ferry Pool as well as a large group of Lapwing. On the feeders by the visitor centre there were a small group of Goldfinch.
We then made our way to Church Norton, where with my scope I could see a large group of about 50 Oystercatcher along with around 15 Cormorant. It was also a surprise to see over 100 Brent Geese as last time I visited, a few weeks ago, I didn't see one!
There were also lots of Turnstone which were hidden amongst the waterways of the mudflats and the grasses that were growing on them.There were also quite a few Grey Plover. Curlew where also quite high in numbers as they probed the mud for tiny morsels.
After asking a few …
Post a Comment
Read more

Half Term Birding and More... 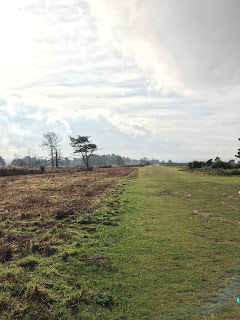 After almost a week back at school, I have finally got round to writing a blog post on what I got up to in the holidays!

One of the days, after hearing that a Great Grey Shrike was showing well at the Old Airstrip at Ashdown Forest I persuaded my mum to take me (and my dog) there. We arrived quite late, at about 10 o'clock. Surprisingly it was still quite misty and as we walked down the path the view was blocked by it.

After asking a few people where a 'muddy pond' was I finally found it. There were a few birders there, armed with their scopes and cameras, which helped me locate the bird. It was perched on a tree quite a distance away, but with my Opticron scope I got great views. It would perch on a branch or bush for a minute and then dive down and behind the trees, presumably to catch its prey. Once I saw it mob a Wren!

Great Grey Shrikes are also know as Butcher Birds because, unusually, they keep their prey in a makeshift larder.