Half Term Birding and More...

November 03, 2016
After almost a week back at school, I have finally got round to writing a blog post on what I got up to in the holidays!

One of the days, after hearing that a Great Grey Shrike was showing well at the Old Airstrip at Ashdown Forest I persuaded my mum to take me (and my dog) there. We arrived quite late, at about 10 o'clock. Surprisingly it was still quite misty and as we walked down the path the view was blocked by it.

After asking a few people where a 'muddy pond' was I finally found it. There were a few birders there, armed with their scopes and cameras, which helped me locate the bird. It was perched on a tree quite a distance away, but with my Opticron scope I got great views. It would perch on a branch or bush for a minute and then dive down and behind the trees, presumably to catch its prey. Once I saw it mob a Wren!

Great Grey Shrikes are also know as Butcher Birds because, unusually, they keep their prey in a makeshift larder.

Happy with the views I had we walked back to the car, on the way back, I spotted a few Reed Buntings, 2 Pied Wagtail and a flock of what looked like Redwing. On the way back I made a quick visit to Weirwood Reservoir after hearing that a Great White Egret had been present for quite a while. Unfortunately, after scanning for a while, I couldn't see it anywhere.

However I did spot around 20 Lapwing, Teal, a pair of Gadwall, 18 Great Crested Grebe, lots of Cormorant, a Kingfisher or two that kept flying and calling around the reservoir, a Jay, 3 Snipe, and around 15 Greylag plus a Canada Geese X Greylag Goose.

As I was about to leave 2 bird of prey flew over the reservoir, one that looked like a normal buzzard and another buzzard but with a white rump. After putting these photos out on twitter it was identified as a female immature Haris Hawk. 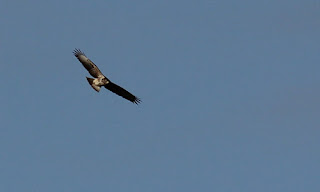 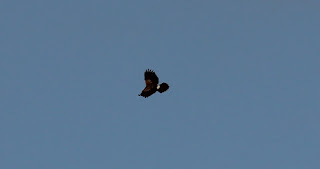 Finally, the other day I entered the Cairngorms Nature Young Presenter competition, where you had to record 1min and 30 seconds of you talking about any subject in nature. I chose to talk about fungi, as I have been quite fascinated about them recently, as you can see from my last blog post. Here's the video and if you have any feedback I would love to hear it, as its the first video I have done and I hope to make some more soon!