January 28, 2017
On Sunday I made the regular trip down to Pagham Harbour. A lingering, blanket of fog covered some of the fields despite the blue sky and sun which was finally making an appearance.

We arrived and I decided to walk down to Ferry Pool. On the way a Kestrel hovered very closely to where I was standing, swooping and then hovering elegantly with its eye fixed on its prey.

To my surprise Ferry Pool was frozen and there was not a bird in sight! Walking around the corner to the mudflats I could hear the whistling of wigeon. It turned out that the Wigeon, Teal, Redshank and Black-Tailed Godwit were flocking around the waterway that leads in the harbour. As we were walking back to the car to head to Church Norton a small bird flew very quickly above me in the sky, I managed to get some photos and could see it was a Snipe!

At Church Norton I couldn't see anything out to sea but in the harbour it was buzzing with bird life. Suddenly a huge flock of Brent Geese, followed by another, flew past heading right along the coast.
Turnstone, Oystercatcher, Redshank and and a big group of Dunlin took up the majority of birds. But Wigeon and Teal could be seen on the water along with a few Curlew amongst the other waders.

Behind the large group of Dunlin and a few Grey Plover there were 3 Shelduck. Suddenly all the birds lifted as if they had been spooked by something. As I was looking through my scope I heard the sound of wings flapping, looking up in surprise a bird of prey zoomed past my head, a Peregrine Falcon! 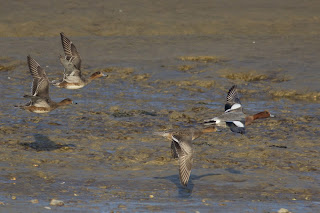 Later on in the week, on Thursday, I travelled 5 minutes down the road, to Bewbush, Crawley. 2 Waxwings had been reported feeding on an apple tree there in among some houses and sure enough when I got there that's what they were doing! I managed to get some decent photos despite the dull light. Also I noticed that one was colour ringed, this meant it had been ringed in Scotland by the Grampian Ringing Group!