A Great Day Spent in Rye

June 06, 2017
A bit of a delayed blog post about a visit to Rye Harbour Nature Reserve a couple of weeks ago, which is about an 2 hour drive. The first bird I saw was a dunnock singing from the hedges in the car park. Walking down the path, a couple of common terns flew over my head, one with a fish in its beak. Reaching the first hide I spotted quite a few avocets, one right in front of me and one with a chick in the distance. As you can see from the second photo there is heat gaze due to it being so hot!

Further along the path we stopped off in another hide where starlings foraged in amongst the grass.  I could also see little terns and oystercatchers in the distance that were sitting on nests. As I scanned the landscape with my binoculars I spotted a small, fluffy bird running around the edge of the water, this was a ringed plover chick! This was followed by the parent making an appearance as well.


In front of the hide also was a redshank, in summer plumage, hunkering down in the increasing heat.


Walking down the path I managed to get closer views of the little terns, flying back and forth with a fish in their beak, returning to its partner on the nest. A couple of common terns also flew back and forth.

We decided to have lunch on the beach as time was getting on. In the middle of eating my sandwich I noticed a couple of common terns diving into the water metres from where I was sitting. I, of course, had to take this opportunity to try and get some photos! Here is a couple of photos I got:


After finishing lunch we continued walking around the reserve and there was a lot of flowers in bloom, especially along the beach, like this yellow-horned poppy: 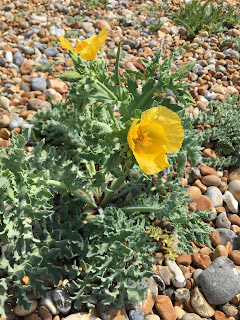 Before entering the next hide a flock of a few hundred black-headed gulls rose into the sky and when I entered the hide I could see that there were hundreds nesting on the islands. Unfortunately I was a bit early in the year to see their cute, fluffy chicks! 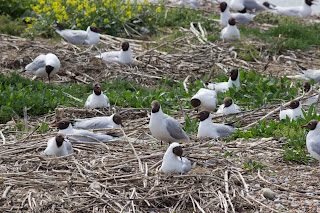 A quick walk to the opposite side of the path and the other islands on the water were packed with nesting common terns. On the path a female wheatear flew up and landed on the fence, before catching some insects and flying off. 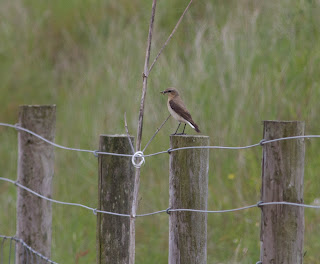 As we began to walk back starlings flew over and amongst the vegetation house sparrows sung. A scattering of linnets also fed on the ground. On the path a skylark was having a dust bath and it let me get very close to it to get a photo! 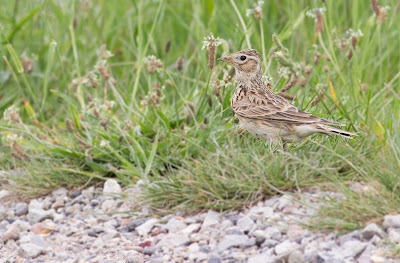 Overall my visit to Rye was brilliant and I hope to visit again in the Winter!